New Prior for Lough Derg

In the 2017 clerical changes for the Diocese of Clogher, the Diocesan Administrator, Monsignor Joseph McGuinness has announced the appointment of Fr Laurence (La) Flynn as the new Prior of Lough Derg and Parish Administrator of Pettigo. For the past 13 years Fr Flynn has been the Parish Priest of Tullycorbet (Ballybay) Parish.  After his ordination as priest in 1976, Fr Flynn first ministered on Lough Derg during the three-day pilgrimage season of 1978 and since then has been a serving member of the Island clergy team for some weeks most summers up to and including the 2017 pilgrimage season. 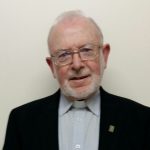 On learning of his appointment as Prior of Lough Derg, Fr Flynn said; “My first thought is gratitude to Fr Owen McEneaney and his team at Lough Derg for their sterling work over these past four years.  In a time when everyone recognises how significantly the faith-landscape in Ireland is changing, I truly believe that Lough Derg still has a unique contribution to offer, and I look forward with humility to taking on the trust that is being placed in me.  To borrow some expressions beloved of Pope Francis:  I intend to seek the way for Lough Derg to move ahead ‘in a missionary key’, reaching out from a place that is geographically ‘on the margins’ to offer a welcome to those who feel themselves to be ‘on the margins’, and spiritual accompaniment to all who hear the call to be a pilgrim and who come our way as part of their journey.”

Fr Owen J McEneaney will now move to Tullycorbet (Ballybay), County Monaghan as the new Parish Priest. This parish has a special connection for Fr McEneaney as it was his first appointment as curate following his ordination in 1984 where he served for 6 years.

Speaking about Lough Derg and his appointment to Tullycorbet Fr McEneaney said; ‘It was a privilege to have been part of Lough Derg and to have encountered so many wonderful people – particularly the pilgrims and their humble witness to faith. I am thankful to the Lough Derg team for their support and wish them and Fr La every blessing for the time ahead. I look forward to my new appointment and returning to County Monaghan.

The appointments of Fr Owen J McEneaney and Fr La Flynn are part of the Clogher Diocesan changes effective from 1st October 2017.