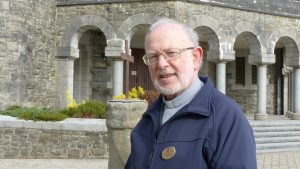 His Holiness Pope Francis has conferred the honour of Chaplain to His Holiness on Reverend Laurence (La) Flynn, priest of the Diocese of Clogher and Prior of Lough Derg, an honour which carries with it the title of Monsignor. The title Monsignor means that the priest has been made an honorary member of the Pope’s own ‘household’.

Announcing the appointment, the Bishop of Clogher, Bishop Larry Duffy, said he was very pleased to receive notification from the Holy See before Christmas. ‘It is a well-merited honour for Fr Flynn and recognises his own significant contribution to the life and ministry of our diocese, of which Lough Derg is an important part. This appointment also signifies a close connection between the Holy Father and the mission of Lough Derg in today’s world. That mission, continuing in the tradition that goes back to St Patrick, is to be a sacred space and a place on the margins where people can find the God of love and compassion’, he said.

‘For me, this gesture on the part of the Holy Father is an unexpected one and a humbling one. I take it as a sign of the esteem in which Lough Derg is held by the Holy See.  Pope Francis has spoken repeatedly of the significance that pilgrimages continue to hold for Christian people in our times, as well as for other religious traditions and for so many of our contemporaries who do not identify themselves as ‘religious’. At Lough Derg we hold dear the memory of St Patrick who, in out-of-the-way places, found his God again when he seemed to have lost everything. I hope that all whom we welcome here will find what they seek along their pilgrimage of life.’

For more than fifteen hundred years the story of Lough Derg has been told and as far back as records go, has been associated with St Patrick. Ancient writings have it that the first monks settled at Lough Derg in the fifth century, not long after St Patrick came to Ireland. It would seem to have been well established as a place of pilgrimage by the ninth century, and there is a famous world map of 1492 on which the only place marked for Ireland is the penitential island of Lough Derg.

The Lough Derg Pilgrimage Season occurs annually from May through until October and the traditional Three Day Pilgrimage season happens between 1st June and 15th August. One Day Retreats and Special Retreat Days run in the months of May, late August and September following by Youth Retreats in September and October.