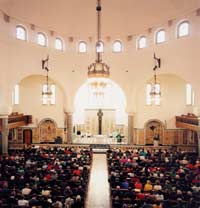 The first church of the modern period was built in 1763 by Anthony O’Doherty and dedicated to St. Mary of Angels, which still exists today on the Island and is commonly known as St. Mary’s. The Franciscans continued their ministry on Lough Derg until 1780 when Patrick Murray became the first of the modern line of priors form the Clogher Diocese.

The caves were finally closed, replaced by a church dedicated to St. Patrick, known as the ‘Prison Chapel’, because of its use for vigil.

Under the ministry of Prior Patrick Keown, the foundation stone for the new church of St. Patrick was laid on 15 July 1925. Work was completed in 1929 and the church opened for pilgrims in 1930. It was consecrated on 12 May 1931 and on 13 August of that year, constituted a Minor Basilica by his Holiness Pope Pius XI. W.A. Scott (1871-1921) designed the church in 1919 in the Hiberno-Ronanesque style.

The greater part of the building is supported on a concrete frame structure, which is founded on a rocky bed of the lake. The walls are constructed of local stone and dressed stone from a Carrickmacross limestone quarry, in combination with reinforced concrete. To each side of the entrance, there is a loggia, a sheltered porch defined by seven columns and stepped approach.

The strong octagonal form is capped with a faceted, copper clad dome. The Basilica has 169 windows in total. In fourteen of these around the walls, figures of the Apostles and the Stations of the Cross have been executed in original designs by Harry Clarke who is considered to be one of Ireland’s most renowned stained-glass artists. Improvements were carried out on the Stained Glass detail in 1988.

Evidence of the Celtic monastic period still exist on the Island, represented in the column known as St. Patrick’s Cross and the deeply incised Latin cross set in the wall of the Basilica, known as St. Brigid’s Cross.